My nose knows a LOT of things. If I don't like something you will see a very baggy snarly lip go up hehe. It might seem scary to you but my humans think it is pretty funny. They also trust that snarl to show them if something isn't good.

When Mom used to use a lot of toxic chemical stuff to make herself "pretty" I used to let her know I didn't like the smell of those things. I would snarl and bark at her if I smelled it. She thought it was funny...until she learned better and knew I was telling her for her own good, WOOF!

Humans can be pretty dense sometimes. It can be VERY challenging to train your human to figure out what is good for them or not (AND for you!) but just stay persistent and sooner or later (more and more it is later bepaws humans only seem to look at their phones not up, down or pay attention to anything else it seems) they will figure it out. Don't let up on them, MAKE them hear you canines, WOOF!

Here is how to understand how we SEE and SCENT humans - so you will believe us when we bark, "That isn't good for you put it down!" or "YES, I like this!"

Just in case that isn't enough for you humans, here is a blog post my human wrote about the COLOR of Scent! Yes you read that right AND there is a video to go with it!

Have you ever wondered why our YL bottles have certain colors on them??? https://www.aspenbloompetcare.com/2018/02/the-color-of-scent/

Any involved dog person will already know this, but still I find it interesting and so I'm sharing.

Those who participate in doing nosework in an organized training fashion, use essential oils as part of the training. I know this kind of "brainwork" for dogs is a great way to help them build confidence and also to release pent up energy.

Some dogs, like my Carolina Dog Ezra, don't get tired from all the exercise as they're very high energy, agile dogs. Engaging in play, hide and seek, etc., that gets him tired. I've not done the nose work YET but definitely want to. This article touches on that a little bit also.

Article: How Your Dog Creates Mental Images Through Scent

From Dr. Doug Corrigan (biochemist, physicist) and his Deep Thoughts Group on Facebook:

"Scientists have been researching the ability of dogs to detect cancer in someone’s body using their olfactory system.

Dogs have approximately 300 million olfactory receptors, which is 50 times more than a human. They can detect and discriminate odors that are present in the air at ultra low concentrations. Unlike humans, their sense of smell is divided into left and right nostrils separately, and this stereoscopic processing of odor information enables them to form a 3 dimensional map of where odors are coming from.

In scientific studies, dogs have been trained to detect cancer by smelling someone’s skin, urine, blood, or breath. They have proven to be able to accomplish this accurately and consistently. Scientists believe that cancer cells emit certain volatile compounds that are not released by healthy cells, and it is these cancer-specific compounds that dogs are sensing.

If the sensing mechanisms of the dog can be mimicked, and these cancer specific compounds can be identified, artificial cancer detection assays and technologies can be developed that detect cancer in someone’s body at a much earlier stage.

Is the olfactory system of the dog the result of random chance, or is it designed?"

Did you know that certain dogs are capable of detecting when someone is going to have an epileptic seizure before it happens?

Scientists don’t understand the exact mechanism of how this works, but it’s believed that dogs can somehow detect a high pitched sound that’s generated by a pulse of electromagnetic energy given off by the brain in advance of an impending seizure. It’s also believe that there’s a characteristic odor that’s given off that’s imperceptible to humans.

If scientists can identify the exact mechanism and develop sensing technologies to measure these signatures, a portable device can be created for people with epilepsy to help prevent seizures before they occur.

Did the dog develop these sensing mechanisms by random chance, or are they designed? 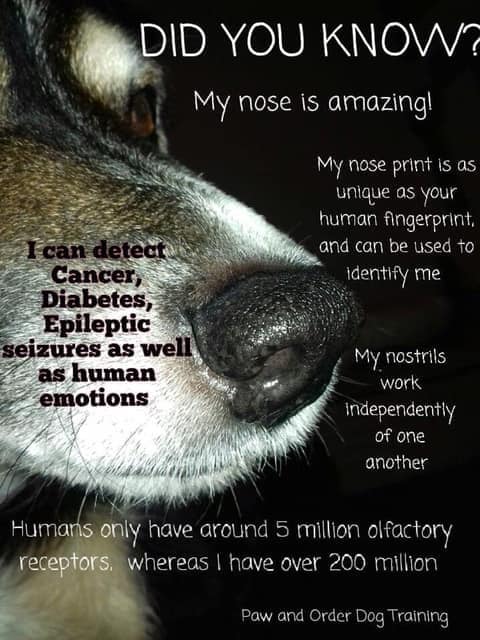 Dog Sense is Scents-able
In Progress
I Can’t Stand That Scent!
Not Viewed
Hide and Seek – Dogs Sense of Smell
Not Viewed

Section Three: Get the Funk Out My Muzzle!!