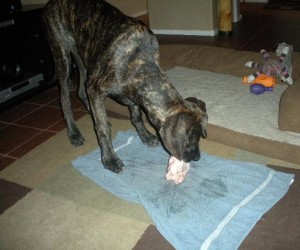 Well there sure has been a lot of “hoop-lah” going on about this so-called latest “scientific study” that states a particular gene is all the proof needed that dogs are the same as humans and can eat starch so they are now supposedly PROVEN to be omnivores. By the way, starch isn’t so good for humans. Just sayin’…

Here’s the link to the study but be sure and put your truth detectors on before reading it: http://www.latimes.com/news/science/la-sci-how-dogs-evolved-20130124,0,1620029.story.

There was a time when science would state that their findings were only “theory” because as we learn and go along those theories change. But no longer. It is stated as though it were fact so the masses will believe it. Before I share further let me remind everyone once again ad nauseum of this quote that is alive and well in America today:

If you tell a lie big enough and keep repeating it, people will eventually come to believe it. The lie can be maintained only for such time as the State can shield the people from the political, economic and/or military consequences of the lie. It thus becomes vitally important for the State to use all of its powers to repress dissent, for the truth is the mortal enemy of the lie, and thus by extension, the truth is the greatest enemy of the State. ~Joseph Goebbels, Propaganda Minister to Adolf Hitler

So here are my own thoughts on this…ahem…study:

What they failed to state, and it is obvious to me, is that the so-called “alpha amylase gene” that allows them to digest grains might be there BUT is the amylase in the mouth or the pancreas? Answer I would bet money on is it is in the pancreas ONLY, not in the mouth as in humans. It means they have to dip into the reserve in the pancreas to be able to digest. Animals are adaptive so this just proves that dogs have had to adapt to the junk humans feed them in order to TRY and survive…their health is failing younger and younger and their lives are plagued with constant trips to the veterinarian for one thing or another, starting with most often: allergies – the early warning signs that the body is out of balance.

Here is what my fellow animal naturopath, Dr. Sarah Reagan stated to me during our email discussion on this article:

What I’m saying is that the genes do NOT dictate the form; it’s not the one way street that the so-called central dogma of biology states. Just because a gene for starch shows up does not mean the dog is all of a sudden an omnivore. What it means is that the genes are reacting to the environment (i.e. what is being fed)”.

Take a look around, dogs are not thriving and are in fact barely surviving. The average life span of a medium sized dog should be 30 years. When was the last time anyone saw a 30 year old dog?

There is also no definitive proof dogs have evolved from the wolf and have possibly always been dogs all along. Yes, that does not mean to say dogs are not carnivores. They are in FACT carnivores. This “study” doesn’t prove otherwise by any stretch of the imagination, funded or not. In FACT dogs DNA is so close to the wolf as to be nearly indiscernible by even the trained expert. But that isn’t what this argument is really about at all.

I know the “gene” isn’t in the mouth or pancreas. But if dogs have somehow “evolved” to have this “gene“, then it is referencing the amylase enzyme that is needed to digest grains. Dogs do not digest in their mouths as we do, so the only enzymes needed are to kill bacteria in the mouth not to digest. They have a lot of saliva to make sliding the food down into the stomach easier. So just because they have this “gene” now (how do they know it hasn’t been there all along?) that does not mean their digestion is like ours.

Dogs can’t grind with their teeth as a horse or cow can. They can’t digest the cellulose in plants as the ruminants can. In fact, they can’t even grind the plants down to extract nutrients as herbivores like the horse can even though it is not a ruminant either. And they have short intestinal tracts in comparison to humans. Also their intestines are smooth – they don’t have ruffles and ridges like ours do 🙂

Dogs have hinge jaws…jaws like an alligator that open and shut, up and down, not sideways as the herbivores do, so that they can grind the plant matter to extract the needed nutrients from them.

Dogs sharp, pointy teeth are designed for ripping, tearing, shredding and pulverizing bone. They have wide, gaping mouths needed to open wide to swallow big hunks of prey flesh. Nothing about them suggests omnivore in their digestion or in their entire anatomy and physiology. However, their anatomy and physiology are definitively that of a carnivore.

I find science to be more and more NOT science at all but having vested interests behind it to sway the results for the desired outcome of whomever is paying for those results. I would like to know who and where the real funding came from on this “study“.

We have been saying this nonsense is only going to escalate simply because raw feeding has begun to really catch on and it is threatening corporate and medical interests. My jaded viewpoint.

Kim Bloomer, V.N.D., N.D. is an animal naturopath as well as being certified in small animal nutrition, with years of experience in animal wellness. Dr. Kim is a published author, writer, blogger, podcaster, and presenter on natural pet care as well as the Co-Founder of the former American Council of Animal Naturopathy. She is the author/co-author of three books, Whole Health for Happy Dogs, Animals Taught Me That, and Essential Oils in Animal Care: A Naturopathic Approach. Dr. Kim’s articles have been featured in various publications in both print and online. She lives with her husband Donnie of many years and their two dogs, King & Ezra that keep things interesting. You can learn more at her website AspenbloomPetCare.com
View all posts by Dr. Kim
Copyright 2005-2023 Aspenbloom Pet Care