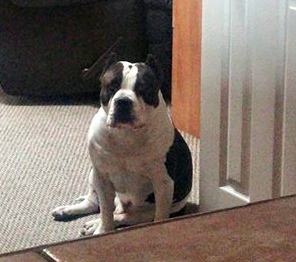 About three months ago King (my American Bully) began playing a game with me that is not only funny but a lot of fun for me – and a nice release for him I am sure. I call it the Howling Game – even though it starts with a whole bunch of barking.

King will sometimes initiate the play by running to get a toy and have me play tuggie wit him. His primary aim isn’t to play with me but to entice Schatzie (my Carolina Dog aka American Dingo girl) to play with him lol. That’s fine, my ego isn’t a bit hurt by that.

Then I begin to bark mimicking Schatzie’s really loud and higher bark, and King’s low, more growly bark. I will howl too. There is a lot of wrestling going on at the same time between the two of them which is King’s favorite game to play with Schatzie. One day King howled back, a long, low howl. It surprised the heck out of me so I did it again and he kept it up with me for a few, good howls then went back to wrestling with Schatzie.

Once I realized this was a new thing he was going to do, I wrote this one morning in a private Facebook message to my friend Jeannie, after it appeared to me that King was either in competition with me on the howling OR he simply joined me like a wolf pack chorus (this is what I prefer to think he was doing): “King cracked me up this morning after Donnie left. We played our game, and Schatzie got rather annoyed with the two of us since she won’t howl LOL! King howled so long I wondered if he were going to stop. I wished I could have recorded it. I’d howl longer and he’d wait and then do it and then look at me as if to say, ‘Your turn’ and that’s how it went. And then later he came to get my attention and was standing up with his front legs on my recliner letting me hug him! Schatzie said, ‘Well what about ME?’ So she came to the other side, knocked my mouse off the recliner ON PURPOSE so she could get her love. Then she came and got King to get down and then jumped up to get HER love. These dogs crack me up! February 11, 2015.”

The audio with this post is one of the times I was able to record us doing the Howling Game – it’s a little over a minute long as we also do some barking – lol. It’s a LOT of fun for me getting to play with my dogs as a dog instead of expecting them to play like a human 🙂

Here are two videos with me playing with both King and our former sweet boy, Meshach:
https://www.aspenbloompetcare.com/2013/04/25/the-giddy-game/ – with King

Until next time, have a NATUROPATHICALLY healthy day – WOOF! 🙂

Kim Bloomer, V.N.D., N.D. is an animal naturopath as well as being certified in small animal nutrition, with years of experience in animal wellness. Dr. Kim is a published author, writer, blogger, podcaster, and presenter on natural pet care as well as the Co-Founder of the former American Council of Animal Naturopathy. She is the author/co-author of three books, Whole Health for Happy Dogs, Animals Taught Me That, and Essential Oils in Animal Care: A Naturopathic Approach. Dr. Kim’s articles have been featured in various publications in both print and online. She lives with her husband Donnie of many years and their two dogs, King & Ezra that keep things interesting. You can learn more at her website AspenbloomPetCare.com
View all posts by Dr. Kim