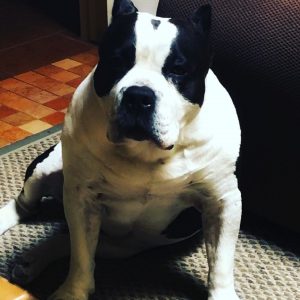 This is just a short post to share my sweet Bubby boy King. He gets left out too often now because of the puppy boy Ezra. So, I’m sharing him today.

He’s now 8 1/2 years old. We’ve had him since he was 13 months old. His best friend in the world is my husband Donnie. King is an American Bully by breed, however, anything but a bully as in the human kind. He’s the kindest, funniest, most handsome and smart boy. This boy is the self-designated therapy dog I never knew I needed. He’s also such a huggable boy now – he wasn’t always though. Age and trust has mellowed him.

As you’ll see in the video, he’s ever so patient with Ezra even while making lots of noise to sound ferocious lol.

While in one pic Ezra appears much bigger, he was simply sitting in front of King to make it look so. Ezra is definitely taller but King is stronger and stockier. He isn’t as muscular as he once was due to injuring his CCL which while he’s never fully recovered from (but you’d not know that to see him move), he still gets daily exercise and LOTS of wrestling with Ezra.

Truth be told, the only reason we got a puppy was for King, but another Bully probably would’ve been a better choice as a companion for him. Ezra would do better with another Carolina Dog…but these two make it work. Ezra adores King – it’s hard not to, he’s so lovable. 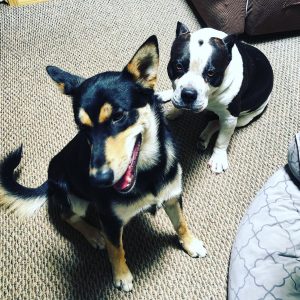 Ezra is NOT bigger than me says King

I have several nicknames for King but my personal fave is Doodle Bug or Bubby. Donnie calls him Buddy Dude. King answers to all his nicknames and his given name. He’s a special boy for sure. Both dogs are naturally reared, raw fed dogs – as they all ought to be!💖💖 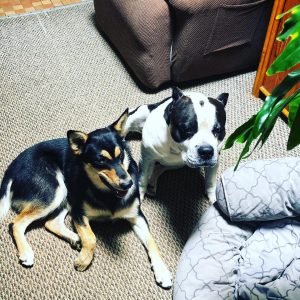 See I told you humans Ezra isn’t bigger than me, just taller, woof!

That’s all, so until next time…

Kim Bloomer, V.N.D., N.D. is an animal naturopath as well as being certified in small animal nutrition, with years of experience in animal wellness. Dr. Kim is a published author, writer, blogger, host of the DOGgone Truth podcast. Her dog wellness program can be found at DOGgone Truth Copyright 2020 Aspenbloom Pet Care, Dr. Kim Bloomer, All rights reserved. No part of this article may be reproduced in any form without the written consent of the Author/Publisher. This article is intended to be educational. However, it is not intended to be a substitute for diagnosis or treatment from a qualified animal health professional. Dr. Kim Bloomer and Aspenbloom Pet Care, do not assume any legal responsibility for misuse of any possible products discussed in this article. The only essential oils ever used, discussed or referenced on this site are Young Living Essential Oils.