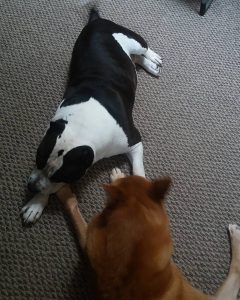 King and Schatzie playing together

Right now I have two dogs. Both are American breeds. Both are, of course, canine carnivores – Canis lupus familiaris. (The domestic dog is a member of genus Canis that forms part of the wolf-like canids, and is the most widely abundant carnivore. Information extracted from https://en.wikipedia.org/wiki/Dog). I had to stress CARNIVORE lol. While they are both the same species with the same genus and same species needs, they are vastly different in their personalities.

Schatzie, my female Carolina Dog has a thick, luxurious coat (much like a GSD or coyote), dark skin, spotted tongue, naturally upright ears, and as close to a natural dog as you can get. Very little change has been introduced to her breed. In fact, one such pack that has recently been “discovered” are still wild and living far from human interaction – while they may not be her exact breed you can see the similarities in this wild pack located in New Guinea: http://www.sciencealert.com/the-world-s-rarest-and-most-ancient-dog-has-just-been-re-discovered-in-the-wild 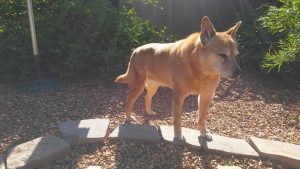 Beauty Queen Ruler of her Domain

Schatzie prefers cool weather to hot – the cold sting of winter to the blazing, dry heat of the desert southwest summers. She isn’t a fan of sunbathing except in winter but she will go and lay out in the shade and get some good grounding done in summer. She is more inclined to lay on cool tile than a warm, comfy dog bed EXCEPT in winter or after our morning exercise. Prior to coming to us she was an outdoor dog, most likely for the first seven years of her life – the age at which she first appeared on our doorstep and a few short months later became a permanent resident in Chez Bloomer (owner relinquished). She is exuberant over her raw meals but is still rather “dainty” (if that term can be applied to ANY carnivore) in her approach to it all. She has no issues with eating rotten or rotting carrion. She has also carried home in her mouth (for half of our morning run) dead baby rabbits to devour once she gets on her home turf. She is still wild in nature in many ways. However, she has learned the fine art of canine manipulation with humans as she is quite observant about her surroundings – which means she has learned rather well what makes us all tick and how to get her way if we aren’t wise to her wiles. She is my steadfast and constant companion – ever the mama’s girl. If she weren’t my beautiful, amazing girl I’d still stand in awe of her as the most natural canine that has ever graced my home! 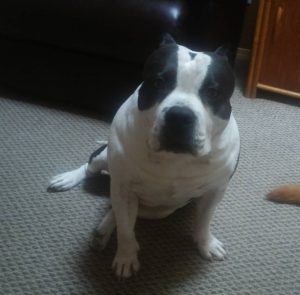 King posing for his 5th birthday

In contrast King, my male American Bully has a sleek, thin coat in black and white tuxedo, spotted skin, normal tongue color, and trimmed ears as their ears are naturally floppy. He came to me that way so don’t cast any stones yo. He is as far from a “natural” dog as you can get, even though this breed was only recognized as its “own” breed in 2013 I believe it was and not as an American Pitbull Terrier.  Several of the “bull” breeds went into creating his breed. King has some challenges in his structure and general wellness in part as a result of his breeding as well as his conventional rearing prior to coming to us – and from a line of only conventionally reared dogs ( I believe natural rearing of this breed could vastly improve it). However, he has quite the personality with lots of quirks interspersed making him quite an interesting companion. King LOVES to take out any “vermin” that dare tread upon our backyard. His inner Terrier hones in and if he catches a mouse, lizard or bird they are toast – as in deader than dead. Oddly enough he never eats any of his own “kill“. He just dispatches them as part of his breeding dictates. If Schatzies does any dispatching she also consumes whatever she “takes out“. She isn’t inclined to kill anything that comes into our yard unless she senses it as a threat to us – which mice, lizards and birds aren’t (but you won’t convince King of that). I am glad that the mice are finding somewhere else to reside though and not because I am afraid of or repulsed by them either.

King eats everything with gusto with the exception of trachea – he prefers it thin sliced thank you very much whereas Schatize in one of her rarer “taste preferences” prefers it as intact as she can get it. Both dogs are indeed carnivores and both hunt, they just each have unique approaches as well as likes and dislikes. 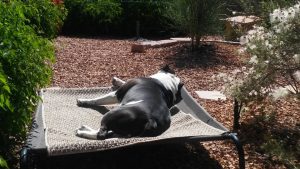 King prefers the warmth of summer and a nice “cot” to sunbathe in every day the sun is shining clear. His preference is warm, soft beds with thick blankets, a nice fire in winter to add to the ambiance and in summer carpets at the very least – it’s rare to find him lying on the tile. He sunbathes on a dog “cot” we purchased this year so he can enjoy his sunbathing all the more. He considers it his and gets a bit agitated when Schatzie sits or lies on it however briefly her stay on it is. However, that said he will NOT take her on because he has deferred to her leadership since the day she entered our home and promptly took over his beds relegating him to the floor. We had to get more beds hahaha! He may be named King but she rules as Queen Supreme in this house. She is VERY patient with him however. She has schooled him rather well in dog manners which has also served him well with his humans. Schatzie is a great teacher and King is a willing pupil.

King has been a “daddy’s boy” from the day he joined our family. He loves all dogs and all humans, but his favorite humans are male. He and I have had to do a LOT of work to make our relationship what it currently is and in the process he has taught me SO much. I treasure this little man. He is quite the comedian this one! He runs a zoomie that resembles a floor buffer out of control lol! I’ve never seen Schatzie even consider a “zoomie” – it wouldn’t be dignified. 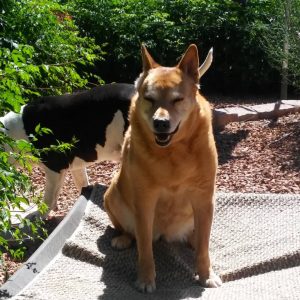 Schatzie gloating over being on the sunbathing cot

In the mornings King has a hard time “getting out of bed” whereas as Schatize is bouncing and raring to go – she is a morning person and he is not. We call her “Bouncy Queen” (otherwise she is always Beauty Queen) in the mornings because of her vocalizations and jumping around like a rabbit. She will even bat King on the top of his head like she’s playing basket ball or something – it really is funny to watch. King takes it all in his easy-going bully stride!

These two dogs really do seem to love each other and have worked as a united team from day one. They just “clicked” together. They are so different from one another but together they are simply a dazzling duet in harmony!

Uniquely united – as a pack, a species, and as the individuals they are. I just felt like sharing some insights into how unique each dog is no matter whose family they reside in and with. I believe understanding them and working with them as both a species as well as with their unique personality will bring a fullness to your relationship with your dog(s). While Im not a dog trainer or behaviorist, I am a lifelong lover of dogs and have observed and learned as much as possible about them and from them for that reason alone.

Kim Bloomer, V.N.D., N.D. is an animal naturopath as well as being certified in small animal nutrition, with years of experience in animal wellness. Dr. Kim is a published author, writer, blogger, host of the DOGgone Truth podcast. Copyright 2018 Aspenbloom Pet Care, Dr. Kim Bloomer, All rights reserved. No part of this article may be reproduced in any form without the written consent of the Author/Publisher. This article is intended to be educational. However, it is not intended to be a substitute for diagnosis or treatment from a qualified animal health professional. Dr. Kim Bloomer and Aspenbloom Pet Care, do not assume any legal responsibility for misuse of the products discussed in this article.