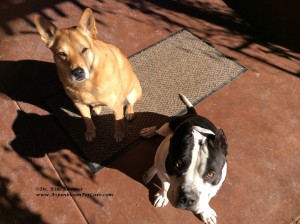 “The greatest discovery of any generation is that human beings can alter their lives by altering the attitudes of their minds.” ~Albert Schweitzer

As animal naturopaths, we know and teach that no matter what the dis-ease of the animal’s body (or mind), no matter what “label” (aka diagnosis) a veterinarian might put on it, that focusing on the symptoms as anything more than a road map to guide us will NEVER facilitate healing or wellness in our animals. Our focus is always to promote health over treating disease.

Here is an excerpt from our book, Essential Oils in Animal Care: A Naturopathic Approach to delve into this in a little bit more depth:

Holistic health is not intended to serve as a Band-Aid or a one-time fix to a symptom. It is an ongoing lifestyle, a journey; ultimately it means living better and being healthier both physically and mentally.

Formulating a successful holistic lifestyle plan to keep our animals healthy relies on more than simply striving to keep them free of disease; it also involves maintaining a balance between each interdependent function of the body to reward optimum health.

Holistic or naturopathic health is based on the principles that the body has the inherent ability to heal itself. Every illness has a cause − whether it manifests at the physical, mental, or emotional level − and symptoms are expressions of the body’s attempt to heal. Symptoms are not the cause of illness, but if they are allowed to continue long enough, they may trigger other illness conditions and you can find yourself allegorically “chasing your tail” much as your dog might! The emphasis is on using the laws of nature to build health and prevent disease.

We must look at the whole animal and the whole picture to achieve whole or total wellness. OUR thoughts and emotions, OUR fears towards what is going on IN our animals and OUR attitudes TOWARDS them will in part determine the outcome of the wellness level of our animals. That may sound weird but because those things are vibrations and everything in life is vibrational (including our thoughts and emotions – as is being soundly determined through quantum physics) then as Stan Harris says, “What you’re afraid of you will attract to you” and in this case to our animals as well.

Examples of this include being sad around our animals when they’re chronically ill and calling them by the label they’ve been diagnosed with: “Oh my poor diabetic boy” or “My poor, sweet cancer kitty”, etc. How we view and interact with our animals DOES contribute to their decline or restoration.

“Sickness is a vibration that works against the body and causes it to decompose.” ~Jeff Jansen, Glory Rising.

When we resort to the toxic, synthetic, chemical soups known as modern drugs we are merely staving off the inevitable – which is more illness. Those drugs can do nothing more than mask the very symptoms that are the road map to the root cause of the dis-ease! They are the body’s alert system so that we can discover where the compromise in the body’s defense system lies and address it there. The body always desires to be in homeostasis (balance) but it can’t even direct itself when we cut off its alarm system thinking we’ve fixed the problem.

“Drugs never cure disease. They merely hush the voice of nature’s protest, and pull down the danger signals she erects along the pathway of transgression. Any poison taken into the system has to be reckoned with later on even though it palliates present symptoms. Pain may disappear, but the patient is left in a worse condition, though unconscious of it at the time.” ~Daniel H. Kress, MD

If someone has broken into our home and we simply turn off the alarm system it won’t stop the burglary from happening or remove the burglar. The burglary needs to be arrested (stopped) and then the burglar removed from the premises! The same is true in health.

From the above quotes you can ascertain for yourself that giving a drug of any kind merely eases (palliates) symptoms but will not bring the body back into balance (health). You can also ascertain that these doctors refer to the drugs as POISONS. Poison can’t heal or cure anything. These mislabeled “medicines” are powerful TOXIC drugs that shut the body’s alarm system off and wear it down so it won’t continue to protest.

We are often approached in natural health with the person inquiring about which “natural remedy” to give their dog/cat/pet for xyz ailment because they believe the drugs “worked for a while but the problem came back.” Now they want to try the same approach only using a “natural” remedy. This means the person hasn’t yet connected the dots to the fact that their entire animal needs support and treatment, not just a remedy, natural or otherwise. As we’ve repeatedly stated, in all actuality the drugs NEVER worked, they merely hushed the symptoms, allowing the cause to go deeper and deeper into the body which then furthered the decline and imbalance to the entire being (animal or person).

It’s really hard to understand why the symptom approach to healing a body is progressing at an alarming rate rather than abating while the rising cost of “health” care (really disease creation and management) has skyrocketed – in animal health as well as human. Modern medicine thinks that by quieting the symptoms or by removing the “garbage cans” that the problem is or will be solved.

Removing trashcans (or its contents) is really just moving the trash somewhere else – usually to a landfill. A landfill becomes in this case the analogy for the terrain which translates into BODIES – animals and ours.

The “garbage cans” in a body are commonly viewed as growths and tumors that the body has created to isolate toxins as far from the vital organs and organ systems as it can to prevent further damage. The same way we throw out our rotting garbage and move it away from our homes to keep things sanitary and clean. The body does the same thing to keep the body as clean and sanitary as it can.  The absolutely best way to support our animals bodies (and ours) is by not throwing all this garbage into it in the first place!

Cutting off the growths has now allowed the “toxic trash” to spill into the body like an oil spill in the ocean. The toxins then are freed to flow through the blood into all parts of the body. That’s why people will be told their animal (or themselves) has been “cured” but then later and inevitably “another” cancer or growth comes back somewhere else in the body. Then they are told they have ANOTHER cancer; ANOTHER type of tumor; ANOTHER growth; ANOTHER more RARE disease. The reality is that it is ALL the SAME dis-ease; the SAME dysfunction affecting the ENTIRE body, mind and spirit!!

Sadly conventional medicine doesn’t see this dynamic, dependent connection either. In fact they are taught to isolate occurrences and reduce everything to symptoms rather than look at the whole animal/person to determine the root cause for the whole body disturbance. Worse, it then determines to “treat” this disharmonious, imbalanced being (animal or human) with MORE toxic chemicals in the form of drugs, radiation, and yes surgery which merely removes vital body parts – a figurative “throwing the baby out with the bath water” that causes literal decline and ultimately death.

One more thing to note: getting growths biopsied is a form of opening up the trashcan. And remember this is a WHOLE body issue not an isolated body part incident. Having this growth on the outside of the body is a lot better than it being on the inside growing – regardless of the “label” the veterinarian puts on it!! It shows the body is still strong enough to keep this trashcan away from the vital, healthy interior “city” and the rotting outside the wall of the “city”.

Also note that fear will motivate us to do things that have no foundation in truth or logic as well. If you are visiting a conventional veterinarian or even an “integrative” one, you will undoubtedly be fear-mongered in most cases.

“We have a multi-billion dollar industry that is killing people, right and left, just for financial gain. Their idea of research is to see whether two doses of this poison is better than three doses of that poison.” ~Glenn A. Warner, MD

With animals we can take a very different approach IF we get OUR own mindsets pointed in the right direction. Since animals aren’t going to be fearful about these things, they simply “deal” with them as they are, then it’s up to us to change how we view and approach their care during these chronic, critical illnesses.

Leave the garbage cans alone; get guided help on a whole health approach to bring the entire animal BEING back into homeostasis and balance. Better yet, do this BEFORE your animal is ever sick and help them maintain a vibrant, healthy life all their days so you can both enjoy the reason you are together: as companions, not as medical problems.

“If I could live my life over again, I would devote it to proving that germs seek their natural habitat – diseased tissue – rather than being the cause of dead tissue. In other words, mosquitoes seek the stagnant water, but do not cause the pool to become stagnant.” ~Dr. Rudolph Virchow, the Father of Modern Pathology

“The doctor of the future will no longer treat the human frame with drugs, but rather will cure and prevent disease with nutrition.” ~Thomas Edison

I have solutions to empower you. I invite you to consider them for your animals before they are ever ill so that you can promote health through lifestyle now rather than treat disease later.