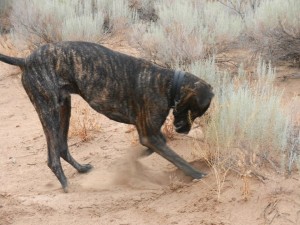 When allowed access to their natural environments, animals can self-medicate even if that can’t be proven scientifically since it is subjective – at least according to science it is anyway.

To sidetrack a bit it always amazes me how humans feel the need to have to “prove” the intelligence and cognition of animals. It is our arrogance thinking that we are the only intelligent, cognitive creatures on the planet that has gotten us into all of this trouble in the first place…believing or thinking we can somehow improve upon nature’s intelligent design.

So back to the self-medicating of animals – whether SCIENCE can prove it or not isn’t a validation marker for me. It is evident to anyone observing animals that this is exactly what they are doing if given the proper access. So it is with pleasure I am sharing this article: USU research professor studies ‘pasture pharmacy’.

Nature has always provided a natural pharmacy but it is mankind’s hubris and intervention in thinking it could duplicate and patent the constituents of that pharmacy that has us going right back to nature to attend to animal kind since our methods are not working – they are merely palliating and/or masking problems not preventing or curing anything.

I for one am very happy to see this trend towards allowing animals to utilize their inherent intelligence and ability to seek out what is best for their own health. We should however, start with allowing them to eat what is natural to them in the first place though and then we’d begin to see a whole lot less problems with dis-ease and parasites. In fact those of us who do honor nature this way DO and ARE seeing MUCH healthier animals without any need of mankind’s pharmacological intervention!

Let’s segue to a case in point that recently happened was a friend came to me asking about a situation with her dog (joint issue). She went to the vet and received NO diagnosis – they didn’t even try to find the cause (to which I responded well that’s par for the course). Her dog did receive a laser treatment to the leg (I think that’s what she told me anyway)  and a prescription for an NSAID drug that has caused known deaths in dogs as well as liver issues in many. Thankfully he received none of that horrible drug since she asked me before giving it to him. I was able to point her to the natural remedies already in her home arsenal! I’d share those but DOGgone it that would make me non FDA compliant since we represent the company for the products we are using as independent distributors.

Anyhoo…I asked her a lot of questions to see if together we could figure out what caused this issue in her dog in the first place in since the high vet bill and vet visit didn’t address that – grrrr hackles raised. Her instincts were so right on (not surprising as she is a very engaged dog owner), and I believe she was right. I’m leaving out details because they are private and they won’t add to the point I’m attempting to make here. Her dog had also quit eating much over the week’s time this was going on with his leg. Dogs will often naturally fast themselves while attempting to heal (many species do that in fact so that energy can be directed to healing rather than to digestion). That’s actually a normal response if we’ll allow it. 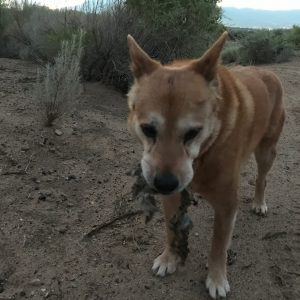 The good news was, because of our discussion, she decided to switch her dog to raw feeding – woot or should I say WOOF!  He began eating almost immediately! He had fasted because he instinctively knew his body needed to rest while healing as well as not take in any unnecessary toxins – i.e., the kibble. My friend asked me some questions later which allowed me to further address that dogs are CARNIVORES. Not omnivores as is the common veterinary dogma and doctrine. I was also able to further explain that our animals are NOT extensions of us as we’ve come to believe in our society – my over zealous response to some of her questions but which she received so well. In fact she said her husband said he loves me lol!

I did go into some of the ethology and ecology of the canine nature with her as well. Which leads me back to the fact that her dog knew how to self-medicate himself. Which in his case meant fasting and not eating any of the toxins masquerading as food for him and resting a lot.

To digress just a bit further I watched a wildlife show a few years ago about lions (I love watching anything on the lions). The lionesses go off on their own to have their cubs and bring them back into the pride when they are strong enough to hold their own a bit. So that means the lioness has to leave the cubs alone when she goes to hunt. In this show a mamba snake came upon the cubs and bit each one and killed them (it didn’t eat them, it just bit them and they all died). It was so sad. When the mom came back the mamba was still there and she of course went to attack it and it bit her also. I thought surely she would die. But she didn’t. She walked like a drunken sailor to a waterhole, drank a lot of water, then went off to sleep in some brush. I kept thinking well some other lion not in her pride is going to find her and kill her or a hyena, etc. No, she was truly blessed. She didn’t eat for a couple of weeks! She slept, drank water and then came back to the pride healed!!

Back to my friend’s dog….once he was offered real food, he dug right in and has been digging in and it ever since! It was actually great he HAD fasted so his body had already been doing a toxin dump. Now he is able to take in the REAL carnivore food and his healing has begun in earnest. It was a hard lesson but she was ready to listen to her dog and he is going to forever benefit from that! AND my friend is now taking my DOGgone Wellness course now too!

Of course the factory farm settings will continue to spend exorbitant amounts of money to figure out how to avoid nature rather than just spending that money to take proper and natural care of the animals they are profiting from. Any time we violate the laws of health mandated in nature, there will be and are consequences to pay. I’d rather just do the right thing to begin with and see my own dogs flourish as a result; as they rightly deserve.

Maybe in domesticity we can’t allow our animals full access to what they’d learn to utilize in their natural wild environment – something that is also passed down generationally so they learn (another element in nature our domestic animals miss out on).

However, by honoring the laws of nature, beginning with their species appropriate, natural raw diets we can see healthy, thriving animals without the intervention of mankind’s synthetic, unnatural, hubric products designed only for profit that have no concern with the well being of animals.

Kim Bloomer, V.N.D., N.D. is an animal naturopath as well as being certified in small animal nutrition, with years of experience in animal wellness. Dr. Kim is a published author, writer, blogger, host of the DOGgone Truth podcast Check out her new wellness program for dogs, DOGgone Wellness. Copyright 2018 Aspenbloom Pet Care, Dr. Kim Bloomer, All rights reserved. No part of this article may be reproduced in any form without the written consent of the Author/Publisher. This article is intended to be educational. However, it is not intended to be a substitute for diagnosis or treatment from a qualified animal health professional. Dr. Kim Bloomer and Aspenbloom Pet Care, do not assume any legal responsibility for misuse of any information provided in this article.