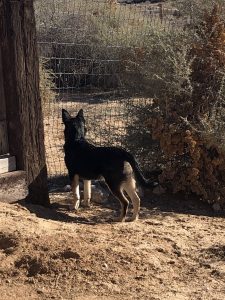 “Now thanks be to God who always leads us in triumph in Christ, and through us diffuses the fragrance of His knowledge in every place. For we are to God the fragrance of Christ among those who are being saved and among those who are perishing. To the one we are the aroma of death leading to death, and to the other the aroma of life, leading to life.” ~2 Corinthians 2:14-16, NKJV

The Black Knight, Fierce Seer in the Night, had his nose bent to the ground yet again. To him the fragrance of life and death was always all around him. He loved to dig deep into the earth to unearth both the dead and the living things. Rotting leaves, or fresh roots was all the same to him as it was the fragrance of all that makes him canine – living through the intensity of scent.

She was watching the Fierce Seer dig, dig, dig…then gnaw, gnaw, gnaw. She wondered if he knew he was the purveyor of death to so much flora and fauna? She also knew that from the death of those much more life will one day come – most likely when the Fierce Seer was grown and older. She longed to see the beauty of life and scent flowing within that portion of her yard again but alas it may need to wait another year or so. 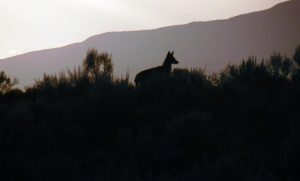 Female coyote following me and Meshach aka Striped Ambassador 2012

Fierce Seer found sheer delight in running this part of the yard that was left to its wild nature much like himself. He was inherently wild as his breed is still found living wild in the Southern part of the country. He felt that Call of the Wild all the time, especially when he visually saw and scented the Wild Ones living all around them. He wasn’t fond of the Wild Ones so much as ready to do battle as his breed and the Wild Ones were very often at odds as it’s how nature often operates in the world. Competing carnivores aren’t fond of each other.

She watched him one afternoon as the Wild Ones raced down a well-worn path by their horse-fenced yard. The wild ones were so big but that didn’t seem to intimidate Fierce Seer. Hackles raised as he ran after them within the safe confines of their yard, She was ever fascinated by both the Wild Ones and the reaction of Fierce Seer to them. He would combine a bark and howl together unlike anything She had ever heard.  He sensed and scented the difference between them and those of his own kind, and yet recognized their similarities as canids. 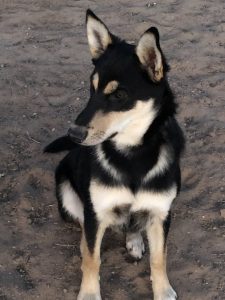 One day in the not so distant past she recalled exactly how the White Light can do that very thing in the natural as well. He can draw us through a Scent so we decide to become the Sent. One summer morning a couple of years ago (She was already one of the Sent for a very long time) She was on her usual early morning walk with Beauty Queen – way before Fierce Seer was even a human thought – She was bemoaning the ongoing draught that deprived Her of the stunning beauty of the desert blooms of spring and early summer She longed to see, smell and experience. She was feeling rather sorry for Herself truth be told. Beauty Queen was just happily ambling along scenting all that is available to those of the canine persuasion, especially in the warm months full of life all around – they don’t bemoan what isn’t visible. The Sent ought to not either as they KNOW that faith in part is the evidence of things NOT seen! She whined anyway even worse than the Fierce Seer can do in his dramatic puppy way.

Then it happened. She was about to pass by during Her whine fest, a wild bush, but suddenly She noticed it covered in its telltale tiny purple flowers all over it. In fact it was loaded down with flowers. None of its kind all around had flowers, only this ONE bush! She leaned in to get a scent and the beauty of that scent overwhelmed Her. She then KNEW this was another gift from the White Light. He comforted Her sorrow and provided a visual as well as the Scent of His love through this one bush. He did similar with Moses if we know our scriptures didn’t He? 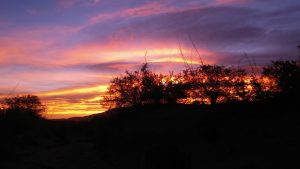 This bush smelled to Her like what She imagined Heaven smells like. It was HIS scent! She will never forget it. She also never forgets that His Scent is exactly what the Sent are supposed to smell like in their attitudes and actions ALL the time. Even when they don’t “feel” like it. She must remember to diffuse the fragrance of Him always.

The Fierce Seer smiling at Her

The Fierce Seer looked up from his latest dig fest, received the pat on his head from the White Light and smiled as only canines can. Once again, he had done well. Beauty Queen smiled on from heaven. She never knew the transaction that had just transpired, but She did know that the White Light never does anything without Love because He IS Love.

The Temporal Story that Manifested the Allegory

“Scientists have been researching the ability of dogs to detect cancer in someone’s body using their olfactory system.

Dogs have approximately 300 million olfactory receptors, which is 50 times more than a human. They can detect and discriminate odors that are present in the air at ultra low concentrations. Unlike humans, their sense of smell is divided into left and right nostrils separately, and this stereoscopic processing of odor information enables them to form a 3 dimensional map of where odors are coming from.
In scientific studies, dogs have been trained to detect cancer by smelling someone’s skin, urine, blood, or breath. They have proven to be able to accomplish this accurately and consistently. Scientists believe that cancer cells emit certain volatile compounds that are not released by healthy cells, and it is these cancer-specific compounds that dogs are sensing.

If the sensing mechanisms of the dog can be mimicked, and these cancer specific compounds can be identified, artificial cancer detection assays and technologies can be developed that detect cancer in someone’s body at a much earlier stage.

Is the olfactory system of the dog the result of random chance, or is it designed?”

Any involved dog person will already know this, it’s not “new” news to them. Those who participate in doing nosework in an organized training fashion, use essential oils as part of the training. I know this kind of “brainwork” for dogs is a great way to help them build confidence and also to release pent up energy.

Some dogs, like my new Carolina Dog puppy don’t get tired from all the exercise as they’re very high energy, agile dogs, highly intelligent dogs. Engaging in play, hide and seek, etc., those help tire him. He’s also still a puppy so he’s even more energized than a mature dog. I’ve not done the nose work YET but definitely want to. This article touches on that a little bit also, “How Your Dog Creates Mental Pictures Through Scent“.

The previous articles in this 4-part series:
The Fierce Seer
The White Light
The Unseen

Additional resources:
The Color of Scent
Oily Dog Courses
The Be Well Book on Audio

PHOTO ATTRIBUTION: ALL photos copyrighted by Dr. Kim Bloomer. All Rights Reserved. None may be used without express written permission. Thank you.

Kim Bloomer, V.N.D., N.D. is an animal naturopath as well as being certified in small animal nutrition, with years of experience in animal wellness. Dr. Kim is a published author, writer, blogger, host of the DOGgone Truth podcast. Her dog wellness program can be found at DOGgone Truth Club. Copyright 2020 Aspenbloom Pet Care, Dr. Kim Bloomer, All rights reserved. No part of this article may be reproduced in any form without the written consent of the Author/Publisher. This article is intended to be educational. However, it is not intended to be a substitute for diagnosis or treatment from a qualified animal health professional. Dr. Kim Bloomer and Aspenbloom Pet Care, do not assume any legal responsibility for misuse of any possible products discussed in this article. The only essential oils ever used, discussed or referenced on this site are Young Living Essential Oils.

We use cookies to ensure that we give you the best experience on our website. If you continue to use this site we will assume that you are happy with it.OkRead more