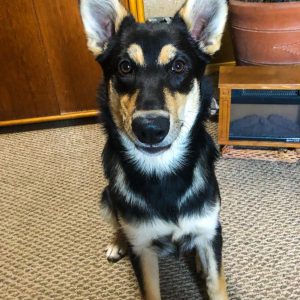 Allegory – continuing the ongoing saga from the Be Well book…

It was so cold outside, the last thing She wanted to do was go entertain (her perception) the Fierce Seer yet again today. He’s still young yet, preferring companionship to solo reflection…but that is slowly (ever so slowly in her mind) changing. He’s strong as his given name implies. He seems to think he’s bigger than he is, but that has never stopped those of his kind. So she geared up to brave the weather.

The Fierce Seer was calling Her out of Her comfort zone as that’s part of his mission here. She has been so very resistant, but that will never deter him. He obeys the Voice of God, so must She as that is how we show God our love…especially when it makes no human sense. The Fierce Seer knows it makes canine sense because whatever God says just is his will to do.

Reluctantly, groaningly She puts on all of her cold weather gear to traipse around their native lower yard in the never ending circles on the half acre of land. The Fierce Seer has plundered over half of the foliage and fauna much to Her dismay. This Sabbath day, God was about to show her something that would change her entire attitude, demeanor and outlook. 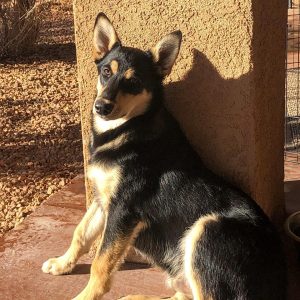 Come on the Fierce Seer beckoned, let’s “go, go, go!” as she was want to say in the early morning walks – which she never seems to mind. It’s the midday and afternoon walks she would rather stay inside doing human chores or working on her computer. The Fierce Seer was calling Her to more than fresh air, movement and fun…he was calling Her to an experience!

As the afternoon darkened and the wind increased, She was actually beginning to enjoy the outdoor break in the wildness of that afternoon. It wasn’t a work day after all and why not enjoy the elements so She could actually hear the Voice of God. With the Fierce Seer running and dashing about wildly as he is want to do, she began to laugh at his antics and breathe deep of the cold, brisk, snow flurry air. Before long She was praising God, lifting Her hands to Him, inviting Him to join Her in this dance, the music all around her! Then She remembered that Holy Spirit is often referred to as the Wind. So She asked Him to allow Her to experience that – and He did! He swirled about Her head, not once but twice during that afternoon. Some would poo poo that but She knew it was the Truth – because She knows the Person of Truth personally.

The Fierce Seer was delighted to see Her experiencing the Truth, the Fire, the Wind of God! He was watching Her and he felt the gentle pat upon his soft, young head letting him know the Creator was proud of him. He trotted about confidently all the more after that with his tail curled over his back, ears alert, ever eager to play or to rapidly revert to Her Fierce Defender if need be! Young or not, he knows what he’s here for. He had seen to it that She also honored several of the laws of health She has taught for years – fresh air, exercise, trust. He was quite proud of himself but not in the arrogant way often taken in humans. 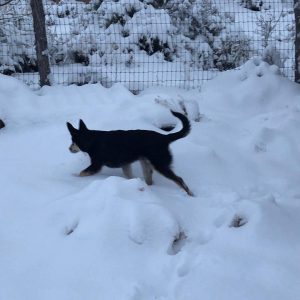 Ezra’s first snow day – and only snow day so far

She cried, She laughed, She rejoiced in Her Master’s Voice, His Touch, His Love. She leaned into Him, and asked Him ever so quietly if He would help her with something. His answer was a firm YES and AMEN! For the first time ever She was able to leave this particular need in His Hands KNOWING it would be answered even though it seemed humanly impossible at this point. Nevertheless, He gave Her what She had asked. She cried not in amazement but in deep, deep gratitude that She knows She can always rely on Him. She will be revealing and sharing with others as more of this comes to pass

Thanks to the Fierce Seer, She was able to receive this experience again on Sunday. Now Her belief has gone to a new depth and the journey, the saga continues….


The Fierce Seer’s beginnings with us:
Welcome Ezra to the Pack!
The VelociPuptor

Continuation of this 4-part series:
The White Light – Black Knight
The Unseen
The Scent of the Sent

Kim Bloomer, V.N.D., N.D. is an animal naturopath as well as being certified in small animal nutrition, with years of experience in animal wellness. Dr. Kim is a published author, writer, blogger, host of the DOGgone Truth podcast. Her dog wellness program can be found at DOGgone Truth Club. Copyright 2019 Aspenbloom Pet Care, Dr. Kim Bloomer, All rights reserved. No part of this article may be reproduced in any form without the written consent of the Author/Publisher. This article is intended to be educational. However, it is not intended to be a substitute for diagnosis or treatment from a qualified animal health professional. Dr. Kim Bloomer and Aspenbloom Pet Care, do not assume any legal responsibility for misuse of any possible products discussed in this article. The only essential oils ever used, discussed or referenced on this site are Young Living Essential Oils.