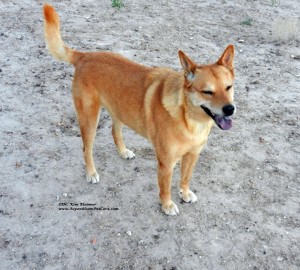 Seems like I often focus on my little American Bully, King, more than my American Dingo (aka Carolina Dog mix) Schatzie. King has been with us for nine months now and Schatzie seven months. In that seven months we have of course raw fed Schatzie. She took to it like the carnivore she is as did King. I want to share before and after photos as well as differences in her health since being switched to raw.

King is just the cutest, high energy, intense little boy while Schatzie is calm, gentle, and shy – such polar opposites and yet they make the best canine pack together! King is a lot more work than Schatzie so maybe that’s why I tend to focus on him so much. Today I want to focus on my little girl for a change. 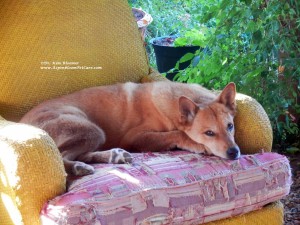 After reading the above two links you’ll see how she chose us and to leave her former owners. They released her and have never inquired after her since that day. I’ve been asked if Schatzie has tried to go home – which she could choose to do each day since we are able to walk her off-leash in the hills here because she stays real close and always comes on a recall – but she has never even attempted to return to them.

We learned from her former owners that she was spayed, vaccinated yearly, fed kibble and microchipped. All huge strikes against her health. 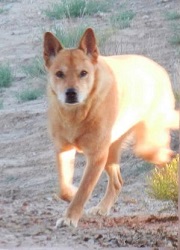 Since her former owners always allowed her to roam, spaying her was probably a very good idea for her and for any consequences of pregnancy for her and potential pups. I am looking at it from a long-term health perspective though not a political one.

Secondly all those vaccines have definitely done damage to her health, her very DNA in fact. I know I may not be able to entirely detoxify her body entirely but I am ever hopeful.

She was fed kibble and obviously not even a “better” quality one if there is any such thing really – I don’t believe there is. But it was a junkier one than others. 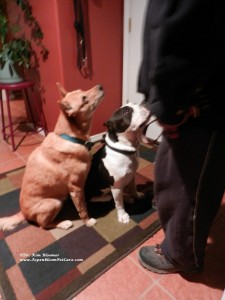 When she first got here, she was of course very sweet and friendly. But she seemed so exhausted and not just from the summer heat. Her eyes lit up when she was the futon and chair we have on the patio for the dogs – whatever dogs grace our home. She “asked” with her eyes to get on that furniture and I said yes. She slept an awful lot when she first got here. I brushed her daily trying to get that awful, dried, brittle fur off of her – she hadn’t been brushed in a very, very long time. That first week I also gave her a bath which she appreciated after the fact 😉

She has some vaginal leakage which I attribute to poor spay. One of her eyes appeared to have been damaged in some way. She sees very well but there is something off in that eye. It is now leaking which I attribute to both detoxification AND trauma. We use CS in it which does help.

I began giving her (and King) fulvic/humic acid which is very supportive to both dogs. And also the Mycoformulas mushrooms (weekly). Along with probiotics and enzymes. Once a week I give King a raindrop technique – Schatzie lets me do a very diluted one about every other week. She does lay nearby as I do one on King. She also gets benefits from the quality, branded essential oils as I diffuse most evenings with an ultrasonic diffuser.

But the most important thing I did and do for Schatzie is to feed her a raw CARNIVORE diet (no veggies or fruits). She had a lot of tartar on her teeth at first and her breath was awful. While she didn’t smell – probably since she lived outdoors in the fresh air and sunshine (with no creature comforts though poor girl) she had some benefits from those, and filtered well water instead of fluoridated water. 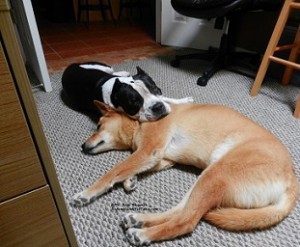 Schatzie was also much lighter as far as weight when we first got her. She felt so light I could lift her up – no density to her body structure, more frail in other words. But since she has been switched to a raw diet several things have changed about her:

1. Her poop was awful at first of course – and she would have diarrhea and sometimes have foamy vomit as is common when a dog is first switched to a raw diet. Her body was ridding itself of toxins and she was getting her “carnivore on“.

2. Her coat was so course and rough it wasn’t “pet-able” and this dog was desperate for love and attention. I gave it to her anyway because I knew she needed it and I just fell in love with her from the getgo – just like I did King.

3. She would cough and hack a lot at first and her eyes seemed sort of glazed. Plus she slept a lot. Her energy was very low.

4. Her nails looked like they hadn’t been trimmed in a really long time – the dew claws were dangerously overgrown in fact.

I am here to tell you now that she is not the same dog in just a short four months! 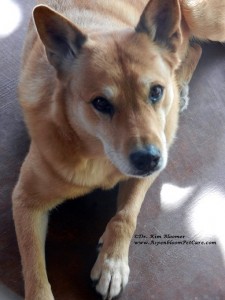 1. She has a sleek, soft and shiny coat.
2. Her eyes have cleared with the little bit of leakage due to detoxification
3. Her teeth are white and no more bad breath
4. She has muscled up very nicely and looks forward to her daily walks and as well as performing perimeter scout duty of our home territory with King throughout the day.
5. She is losing the rough elbows she had from sleeping on concrete – we have several very padded doggy beds with comforters on them in the house much to her delight.
6. She sits perfectly still now for her weekly nail trim and delights in the praise she receives for doing so – and her dehydrated meat treat or marrow bone of course!
7. She is much more secure in her place here and the leader of her two dog pack. She is a delight truly and while all dogs, like humans have an annoying habit or two, hers aren’t so bad at all. She is a very loving and sweet girl and we are happy to share our home with her and we know King absolutely adores her! He is a lover not a hater lol.

For those sitting on the fence about raw versus kibble or home cooked, I encourage you to consider the benefits for your dog and the joy they get when they eat what they were designed to eat in the first place. Just don’t listen to the veterinary community on this UNLESS the vet you listen to is advocating a raw diet against the naysaying advice of their boards and colleagues.