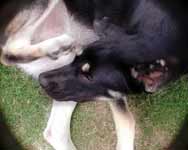 Conventional pest control is a common practice among pet owners these days. After all, we’ve been taught to be afraid, be very afraid of the wicked diseases and pestilence they bring. Yes, I know about Lyme’s disease among other things and I am not discounting that but we have been looking at this all wrong thanks to modern scare tactics convincing us that the only solution is to poison the heck out of these pests and then label it “prevention“. We are, however, poisoning our beloved pets in the process as well.

These critters are something all dog and cat owners get nervous about, especially during the warm summer months. However, we would begin to understand that these “pests” (what we consider to be pests anyway as there is a balance in nature if we’d stop interfering with our chemical poisons) can only truly infest, infect, etc., within a perfect host during a perfect storm in the body, then we’d not allow the big pharma-medical industry conglomeration continue to scare us into putting horrible topical and internal poisons ON and IN our beloved pets while believing that they are being protected from these pests. All I can say is – take off those gloves if you believe these pesticides (which is what they are -and so is the internally given pill) are so safe they can be applied to the fur and skin of our pets. Wouldn’t it stand to reason that if it is safe to put this stuff ON our pets they’d be safe to touch on our own skin also, right? Wrong on both counts.

These pests all have TWO things in common: they need a PERFECT host (a depleted immune system is what vaccinated, kibble-fed, pesticide laden pets are) and they need a PERFECT storm. The only reason more pets get infected these days is actually due to of all the pesticides, toxins and junk food they are inundated with and then we have the audacity to call this “health” care but it is merely disease in the making.

I’ve had veterinarians tell me that I am cruel for suggesting pet owners NOT use these POISONS on and in their pets. That makes NO sense. Understanding how the body REALLY works and supporting it through a proper, species appropriate raw diet, stopping the endless vaccines and other toxins, while adhering to the laws of health is the TRUE prevention.

But what can I say, the income flows from disease treatment, drugs, pet food, and vaccines but very little in using what is in nature with amazing results. We sure don’t see any wild canids lining up to get their dose of poison to “prevent” these pests. Unfortunately many of us are duped into believing all of this propagandized fear mongering to make these corporations richer.

Pathogens and micro-organisms are part of life. They are the original life forms and they fulfill a very complex function. All forms of cellular life on earth share genetic links. Humans are genetically linked to so-called pathogens, or micro-organisms. We actually consist of bacteria, fungi, viruses, parasites and other micro-organisms and they form part of our system. Plants and animals are also made up of these. Bechamp discovered that if he stopped fighting micro-organisms and instead improved what he called the ‘milieu’, the environment of the cells, the so-called ‘pathogens’ did not disappear but actually aided in repairing the cells. By not focusing on the disease but on healing instead, Bechamp witnessed the pathogens doing the same. When he concentrated on the disease, however, and literally tried to combat it, the pathogens proved themselves to be the worst enemy. He showed that micro-organisms are the bridge between life and death, and the stage in between – disease.~Mike Donkers, Understanding the True Meaning of Disease

More Bad News for spot on Flea and Tick Treatments
The Center for Public Integrity has recently reported the EPA has asked manufacturers of spot on flea and tick treatments to provide detailed information of adverse reaction incidents. ABC News reported in 2008 more than 44,000 severe reactions and 1,200 deaths were reported.
http://www.truthaboutpetfood.com/articles/367/1/More-Bad-News-for-spot-on-Flea-and-Tick-Treatments/Page1.html

Here is a story from Ingrid, a friend of mine in South Africa, who had a very heartbreaking thing happen with her dogs and it’s also why she’s not only an adamant supporter of dogs being cared for NATURALLY but why she’s so angry at the big pharma-medical industry agenda actually keeps pets sick, dying and definitely NOT healthy (story used by permission):

“Just as your “trusted” vets keep peddling useless and inefficient annual “booster” vaccinations, containing brain-scrambling and carcinogenic adjuvants, and (in many cases lethal) NSAIDs (non-steroid-anti-inflammatory drugs), such as Rimadyl, Deramaxx, Previcox, Metacam, etc., they will also assure you that tick and flea products, such as FRONTLINE are “safe” and any adverse reaction must have been caused by an “underlying conditions” – their favourite moronic excuse!

When both of my boys, Andy and Mikey, who had never been ill in their 13-year old life, succumbed to FRONTLINE in 2004, both exhibiting the same symptoms, i.e. paralysis of the hindlegs, I researched the toxicity of Frontline and other flea and tick products and discovered that the active ingredient in Frontline is FIPRONIL, a known neurotoxin and carcinogen. The inert ingredients, which the manufacturer is not required to disclose for “confidentiality” reasons, are just as toxic.”

All of us, including our pets, already suffer from an overload of toxic chemicals, starting with our food. Most commercial pet foods are grain-based and most of the grain, soya, etc. is genetically modified, containing antibiotic-resistant marker genes, viral promoters (in most cases CAMV (cauliflower mosaic virus).(see my article in this respect http://www.americanfreepress.net/html/deadly_tuberculosis_174.html)

Also, Monsanto’s Roundup-Ready corn and soya, used for food and feed, contains glyphosate (now fortified – believe it or not – with Agent Orange! http://www.i-sis.org.uk/whoOwnsLifeNotMonsanto.php). According to a recent study conducted by CRIIGEN (“Glyphosate Formulations induce Apoptosis and Necrosis in Human Umbilical, Embroyonic and Placental Cells”):

“As a matter of fact, Roundup formulations are the most common herbicides used with cultivated GMOs. Roundup Ready soya, the main GMO imported in Europe for food and feed, contains Roundup residues. In this research, the formulations were diluted at minimal doses (up to 100,000 times or more) and they programmed cell death in a few hours in a cumulative manner. We also noted membrane and DNA damages, and found that the formulations inhibit cell respiration. In addition, it was shown that the mixture of the components used as Roundup adjuvants amplified the action of the active principle called glyphosate; one of its metabolites may be even more toxic. These effects are greatly underestimated by the legislation, which does not take these phenomena into account, but instead simply sets arbitrary contaminant thresholds in food or feed. The rules apply to glyphosate whatever its formulation may be, this is wrong.

The authorizations for using these Roundup herbicides must now clearly be revised, since their toxic effects depend on, and are multiplied by, other compounds used in the mixtures placed on the market; and glyphosate is only one of them. The detailed blood analyses of each mammal which has received this herbicide during regulatory tests before commercial release must be published immediately, since our research points to undesirable effects which are currently masked or hidden from scientific scrutiny.”

If on top of the pesticides already contained in their food (which do NOT break down in the gut!), our pets are then bombarded with toxic pesticides in flea and tick products, the rise in (money-spinning) chronic diseases and ultimately death shouldn’t come as a surprise…a friend in Australia, whose poodle suffered from cancer of the jaw bone said according to her vet, he put down an unusually high number of pets with the same cancer (not because the cancer would have killed them, but because pet owners couldn’t afford the treatment). All pets have one common denominator, they are taken for walkies in various parks where the grass, every tree, every lamp post and corner has been sprayed with Monsanto’s Roundup containing glyphosate. ~Ingrid
________________________________
Thank you for allowing us to share this Ingrid. Our pets deserve so much better than this. Don’t let yourself be fooled into thinking this poison is protection for your pets. And know that there is a whole health approach available for you to learn and apply – literally.

Frontline definitely ‘goes systemic’ while Advantage reportedly does not however, I would indeed question any of this since they found in people that just about anything placed on the skin behind the ear reaches the kidneys in less than a minute! The other thing you should remind the vets is when they inject unsafe and unnecessary vaccines, they are ruining the animals Th 1 cell mediated immune arm of the immune system. This Th 1 is actually what is meant to help keep parasites as well as bacteria, viruses, yeast and fungi, internal and external parasites including blood parasites, and bacteria in check! A healthy immune system has a healthy Th 1 cell mediated immune bias! ~Patricia Jordan, DVM ~Dr. Patricia Jordan

Awareness is the greatest agent for change. ~Eckhart Tolle