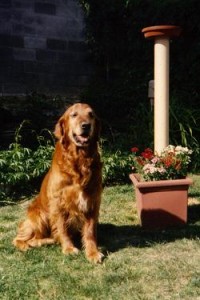 Cute, fluffy, full of spunk covered in self-assuredness – that was my Golden Retriever puppy, Fridge on his first day with us. At the time in 1986, Refrigerator Perry of Chicago Bears’ fame was a well-known linebacker. Fridge was the largest puppy in his litter, so his breeder named him Fridge. I thought it was cute so I kept the name, especially since he already knew it.

After we picked him up from the breeder, he promptly laid his sweet little head upon my chest and fell asleep for the short drive to his new home; I fell instantly in love! Fridge maintained that self-assuredness and his sweetness with me – but sadly, not with everyone after his vaccine program began in earnest.

Fridge’s breeder gifted him to me. I was working as a technician at a veterinary clinic at the time, so she assumed I would provide a good home for this puppy. I’m sure I convinced her I would do that, and I am sure I also thought I would. I began his puppy vaccines shortly after he arrived. By the age of three months Fridge had received three sets of puppy vaccines, as well as a rabies vaccine. I truly believed in the vaccine program for protection and immunity. Fridge was the dog that helped me begin to wake up from the slumber of that lie.

I loved Fridge fiercely. My personal life was in shambles for the first couple of years of his life, which only made me love him all the more as we went through the challenges together. No matter how sad I was, or what struggles I went through, Fridge was always there for me, giving me reassurance and love. I wish I could have known how to return the favor more appropriately for this smart, funny, loving boy – at least the vaccines never changed his sense of humor or his love for his humans.

After that first rabies vaccine, Fridge began having several problems. He never was the gentle, easy-going fellow he was prior to the vaccines. At first, he began having petit mal seizures. Then, he became aggressive with other dogs. Loud noises, thunder, firecrackers, etc. greatly affected him. He would go into a full-blown panic attack, and try to hide under any available surface during a storm or if fireworks were being used in our area. Even the vacuum cleaner affected him.

Some might say it was all just bad breeding or something quirky in him. I know better – I remember his gentle sweetness prior to the vaccines. I saw his pedigree. He came from a long line of very gentle, easy-going, obedience champions.

Fridge also developed hyper-sexuality – something that I have seen repeatedly in vaccinated dogs whether or not they are neutered. This wasn’t just young dog hormones. The behavior was exaggerated, and not something that a normal, healthy dog would exhibit on a constant basis. Fridge either wanted to instigate a fight with another male, or was relentless in his pursuit to mount any female dog that came into close proximity to him. This continued throughout his life.

Let me pause for a moment and share a quote by friend and veterinarian, Dr. Patricia Jordan (which I am sharing with permission from her) about this whole “breed/genetic” thing – I encourage readers to get familiar with the term “epigenetics”:

As time went on, I did double damage to Fridge by feeding him kibble, in addition to the yearly vaccine assault he received. He had a variety of health issues: allergies, repeated hotspots, lipomas, hematoma ears, yeasty ears, hearing loss, etc. Over the years, we spent a lot of time going back and forth to the veterinarian. Fridge received the same treatment over and over – steroids and/or antibiotics. However, none of us got to the root cause or WHY these issues were happening.

I still did not connect the dots to the vaccines. I did notice that any kind of pesticide used in the home or in the yard could trigger a seizure – both vaccines and pesticides have neurotoxins in them so it’s not surprising that pesticides would be a trigger.

Towards the end of his life (I cried an awful lot that last year as I watched his steady decline) his seizures were lasting about 2-3 minutes. He never had any grand mal seizures, thank God. The petit mal seizures were unnerving enough. I decided that no more pesticides would be used, and to begin organic gardening. I’m grateful, as that began my whole journey into a more natural lifestyle for us as well! Sadly, my sweet special boy Fridge didn’t live much past his last vaccine, which was a couple of months before he died. In his frail state I STILL could not see the connection; that last vaccine did him in totally. He went downhill very quickly after that.

Fridge had lost most of his hearing by the time he was age twelve. I know people think that’s a pretty good, long life. People would understand that this isn’t such a great thing, if they knew that dogs ought to be living much longer. It is amazing he lived to that age, considering the assault his body took with the repeated vaccines and junk food diet. Most likely, previous generations had not had such an assault to pass on – something I’ll share in Meshach’s story.

During the last year of his life, there were many signs of his declining health, yet I was in complete denial. It was as if I was thinking if I didn’t accept it, it wouldn’t happen. But, I also wasn’t doing anything differently to help him rally and get better. I kept doing the same thing over and over again and expecting a different outcome – Albert Einstein said that is the definition of insanity and I now agree with that assessment!

When Fridge could no longer get up on his own, not even to go outside to relieve himself, we knew it was time. He had quit eating and drinking. Fridge was never one to miss a meal, so that was a sure sign. I was still denying it all, trying to give him water and that junk food as if that would somehow fix him. He was lying there and breathing those hard, heavy breaths that we all do when we are slowly dying.

I found out years later from a veterinarian friend who specializes in hospice that since Fridge was already in death throes, I could have simply allowed him to slip away on his own terms, in his own home with no stress. But I was still stuck in “vet tech” mode, and thought I had to get him to a veterinarian to put him down. All that stress, in a noisy clinic, which was the same type of place that had brought about his lifelong ill health.

In my opinion, I feel we need clinics for emergency care, but not for much else. In this case, Fridge was beyond any suffering and already letting go on his own – I just didn’t know it. At 4:00 in the afternoon on January 18, 1999, we said our final goodbyes to our precious, loyal, vaccine damaged boy.

There is so much more to share about him, but the fact remains he was damaged by vaccines. We laid him to rest in the mountains at my friend’s cabin, which was his favorite place. My friend doesn’t live there any longer, but Fridge has good company with all of her former dogs and cats, and my sweet vaccine damaged kitty, Misse. Fridge is forever in my heart. I only wish I’d known better. I missed him too intensely, and nothing was easing my grief of his loss. I just simply did not believe I could love another dog after him. I also knew deep inside I had failed him through my ignorance.

I had SO much to learn and was about to begin that intense journey within eleven months of Fridge passing away. My heart was so broken it took eleven dog deprived months before I could even consider having another dog in my life. I missed him every single day but I also had begun reading on more alternative approaches to dog care – little did I know I was preparing for the biggest change in my life to date that came in the shape of a Neapolitan Mastiff puppy we named Shadrach.

About the Author:
Copyright 2015 Aspenbloom, Dr. Kim Bloomer, All rights reserved. No part of this article may be reproduced in any form without the written consent of the Author/Publisher. This article is intended to be educational. However, it is not intended to be a substitute for diagnosis or treatment from a qualified animal health professional. Dr. Kim Bloomer and Aspenbloom Pet Care, do not assume any legal responsibility for misuse of any products that may have been discussed in this article.

Dr. Kim Bloomer is an animal naturopath, a proficient blogger, writer, speaker, podcaster and presenter on natural pet care as well as the Co-Founder of the former American Council of Animal Naturopathy. She is the author/co-author of three books, Whole Health for Happy Dogs, Animals Taught Me That, and Essential Oils in Animal Care: A Naturopathic Approach. Dr. Kim’s articles have been featured in various publications in both print and online. Dr. Kim is the creator and host of the DOGgone Truth podcast.
View all posts by Dr. Kim