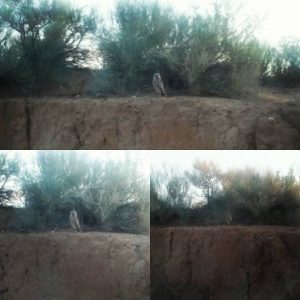 During the month of June and part of July I was blessed to have two small desert owls living in a space I pass by on my morning walk/run with my Carolina Dog, Schatzie. I knew there were owls in the holes in the mesa cliffs but I had never had the privilege of seeing one up close before. During this short six week period, I passed by these two owls – well mostly the male was present as I am certain the female was attending to her offspring. Either he or both he and his mate would be roosting in some sagebrush that was high up enough I couldn’t reach them of course, but close enough that I could see them clearly and even stand and just gaze at them. Sometimes I would just stop briefly to say hello in a soft voice and admire their beauty. Why am I sharing this here? Because I want to know who gives a hoot about the environment, knowing that generations down the line our children’s children will still have opportunities like this one?

Let me share a bit about this so you can gain a little insight as to my heart in sharing this.

During this time I took a few photos (seen here in part) and shared them on my Facebook timeline and on Instagram. I would make comments about them and even jokingly share things like the following:

“Having a conversation with my owl buddies today. Can you spot the male? The female is always up on the higher branch. They each always perch in the same place. I had not seen the female in a couple of weeks so over the weekend I asked the male where his “wife” was. He replied, “Who?” hehe. True story though. The next day she reappeared and has been there every day since. I suppose to make certain he at the very least remembers WHO she is!”

“They are so beautiful! They take my breath away and I see them every morning when I go out running with Schatzie yes 🙂 They always watch me and are very quiet. The male stares at me almost the whole time – the female doesn’t…Last week in one morning nature and I collided. It started with my owl buddy (the male) both going and returning. Then further on our return home, as we were crossing the road to enter the field behind our house, I saw a whole flock of baby quail – they were most likely following one of the parents at least. Two turned back most likely because of us. I was sure hoping they’d wait until the car that was coming had passed. Then as I went out to our road to dump some garbage I picked up on the trail (grrrr) a coyote was crossing the road. It saw me and paused so I stayed still until it crossed. It was thin so I’m sure he was out hunting and I didn’t want to interrupt his process more than I had. I always walk past the owls as quietly as possible so as to disturb them as little as possible.”

I do my best to leave as little impact on the trails around me and to support nature in whatever way I can. From picking up the trash that countless others toss out with little to no regard for the environment, to being quiet when I was passing the owls or when I see quail families making their way through – I don’t want to frighten them so I will either steer Schatzie in another direction or remain still until they pass if I see them in time.

We’ve had rabbits around our own house that we have supported also so they and their babies can thrive without invading our upper private yard as they had in past years. We have quite a few lizards living in our yard as well. They all contribute to the environment as do the coyotes, hawks, roadrunners and other predators. We need them all for a thriving ecosystem.

I am sharing this because I can’t control what others do. I can’t ask people to pick up the trash they leave (mostly since I never see them toss it) or ask them to be kind to the wildlife instead of tormenting them (as I’ve heard of happening with some of them around here), but as Gandhi said I can be the difference I want to see in the world. It might only be in my own area but I can say that through the years of walking in this particular area my husband and I have cleaned up the entire arroyo we walk in.

What if everyone who cared did this in their own area? I believe we’d see great and valuable change.

So the owls have since moved on. I kept hoping each day I’d see them again but they are gone now for this season. I hope they return next year. I have missed them to the point of even having a good cry when I realized they were gone and not going to return. However, I am so eternally grateful for the privilege of having a tiny glimpse into their special and fascinating world if only for a short time. It was a very special time and I will always treasure this memory. Those of you who do care, let’s each do our part to support and do what we can so that generations down the road we’ll still have these opportunities available to us…besides all life on earth matters and it is all interconnected. We may not save them all but we can and are making a difference.

Before you go though, check out my podcast about encounters in nature one special day in Sweden – well and of course I had to preface it with some hardcore stuff first lol:

***When you sign up for my newsletter, you'll receive a copy of my ebook Pest-Free Dog to download free in your welcome email***

We use cookies to ensure that we give you the best experience on our website. If you continue to use this site we will assume that you are happy with it.OkRead more